A Tribute To Amy Winehouse

They tried to make her go to rehab. On reflection, it might not have such a bad idea...

On Saturday, Amy Winehouse was discovered dead at her London home. The police have yet to confirm the cause of death, but if we look at the evidence it's safe to rule out several possibilities:

In all seriousness though, if it turns out to be anything other than a drugs overdose that killed her, people are going to be rather disappointed. A tragic waste of life it may be, but Amy's crack-riddled binges are what took her from a singer to a superstar. The amount of paper consumed to print more pages about her drug abuse has cleared an area of rainforest the size of Kuala Lumpa. She's generated more column inches than a Greek temple.

No doubt you've already heard about Club 27, a growing list of musicians who have died at the exact age of 27. The list includes Kurt Cobain, Jimi Hendrix, Jim Morrison, Janis Joplin, and a bunch of other inconsequential people. Obviously, the lesson here is to steer clear of drugs until you reach 28, then fill your veins without consequences.

More importantly though, will her music live on? Yes, but only amongst a small minority. Most will probably remember her for the numerous times when she attacked loyal fans. Buying tickets for her shows was like paying to stand in a line of people where one of you is going to get kicked in the nuts, like a ball-crushing version of Russian Roulette. Then there were her wacky parents who perpetuated this cycle of celebrity by urging the public not to buy her music. By this stage, she hadn't released an album for around two years, so there was no danger of that. At the time of her death, it had been nearly 5 years since she released Back To Black, which is an epoch in pop music terms (or a Pop-Epoch, if you will).

However, her influence on the music industry will not be forgotten. Thanks to the success of the Winehouse machine, the way was paved for a rhythmic wave of lady singers such as Adele, Duffy, La Roux and Florence And The Machine. If only they'd emulate Amy's substance abuse too.

So farewell Amy Winehouse, the lady who made laryngitis sound soulful. Thank you for the music, and thank you for giving Sickipedia something to live for. 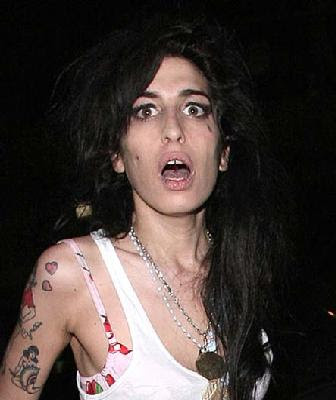