You join us at a very crucial point in the Cluedo championship final.  Our four competitors have gone through three intense rounds so far and yet, no one seems to be any closer to discovering whodunit.  Surely the game will be decided in this next vital round.

The players all take a sip of water, and the game is underway again.  First up is Julian, a Cluedo verteran from back when the 2nd editions were still being published.  Let’s take a look at his stats:

On paper, he is definitely the favourite in this competition.  That’s right.  The crowd are waiting with baited breath for Julian’s next move.  We’re all expecting great things from him.

Julian:  “It was Professor Plum with the knife in the kitchen.”

Oh and that’s a terrible mistake.  Julian has obviously forgotten that Professor Plum was already played in the first round, and as we can see, Kyle has raised his hand to claim the purple Prof as being in his hand.  The pressure must have gotten to Julian.  He doesn't look happy with that.  He’s thrown the towel from around his neck at the referee.  That’s unsporting.  He’s demanding another go; apparently he meant to say Reverend Green but got him confused with the famous rapper, Professor Green.

While we wait on the judge’s decision, let’s look over some the highlights so far.  Yes, here we see Julian kicking over his chair when a member of the audience coughed.  That spectator was promptly thrown out for distracting the players.  Let’s hope we don’t run into any more trouble causers like that.

Back to the action, and it appears that Julian’s appeal his been denied.  Rightly so in this commentator’s opinion.  These athletes get paid far too much to make such elementary mistakes.

Next up is this competition’s wild card, Brian Furniss.  Brian is relatively unknown in the Cluedo world, this being his first ever competitive Cluedo tournament.  He stormed the semi-finals without even breaking a sweat, and he looks quite the cool customer so far.  Let’s see what kind of move he’s going to play here.

Brian:  “I choose Mrs Bun the Baker’s Wife, on B9, with this double-six domino.” 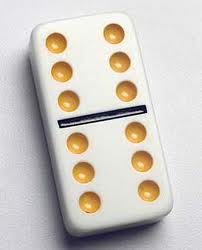 ...Well...that’s left everyone utterly speechless!  Someone get me a rulebook!  Such a move has never been played in the entire history of the sport.  This could bring the game into disrepute.  Everyone is looking towards the referee for an answer, but he’s just shrugging his shoulders.  The crowd are getting restless.  Several audience members appear to have passed out in shock.  Oh the humanity!

The referee seems to be getting some kind of communication through his earpiece.  This will be the official decision.  It stands!  The move stands!  And the crowd go wild!  Since there's nothing against it in the rulebook, the officials have had to validate the move.  Brian wins!

A vortex appears to be opening up beneath the player’s feet.  I can’t...I can’t describe what I’m seeing.  It’s almost as if this audacious move has broken the very fabric of reality.  My face has been sucked clean off!  Is this the end of days?  Let it be known that I regret nothing!

- And this, my friends, is why Cluedo is considered to be the most extreme sport there has ever been.
Posted by Adam Lloyd at Friday, October 12, 2012