It's no secret that Hollywood is on it's arse, both creatively and financially. That's why we at Muppets for Justice occasionally like to suggest new ideas for movies.  Anything to break up the formulaic tedium unleashed by the current slew of film studios.  So, focussing on horror movies, we had a bit of a think tank with a certain undesirable section of society.  Basically, we asked several serial killers to tell us what scares them the most.  If it scares them, it's guaranteed to petrify the likes of you and me, right?  Anyway, here are the results:

Ted Bundy: An old man who has had his eyes replaced with a dog's eyes.

Fred West: How about a child with a jack in the box full of poisonous wasps?

Charles Manson: A haunted toaster that turns itself on when it's unplugged.  It continues trying to toast even when there's no bread in it.

Rose West: A woman in a window brushing her hair, but when you look again she's not there and SHE'S BEHIND YOU - OH GOD! 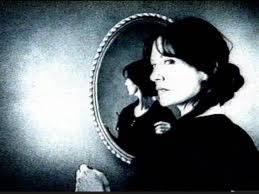 Raul Moat: An abandoned hospital staffed by ventriloquist dummies in nurse uniforms. The admin is done solely by clowns.

Ian Huntley:  A ghost that has died and become a ghost's ghost.

James Egan Holmes:  A group of hooded men stood around chanting, and when you look closer, they're...AHA!  Gotcha!

Seung-Hui Cho:  A leech the size of a hippo.

Jack The Ripper:  An enchanted flute that summons the chupacabra.

Thomas Dillon:  A child on a swing that is on fire but he keeps swinging anyway.  He probably started the fire himself.

John Allen Muhammad:  Moss growing on an old woman who has sat down for too long.

Aileen Wuornos:  Some children go into the woods, but are possessed by a wizard who makes them eat  all sorts of disgusting things like worms and slugs and puppy dog eyes.  He creates a banquet of grizzly foods and forces them to finish the whole thing.  Also, they kill their parents.

Nathaniel White:  A school kid with long hair over her face and she's sepia-tinted.

Scott Williams:  A man in a restaurant rapidly eating his way towards his credit limit, and not giving a fuck.

I can't watch...is it over?  Phew.  I'm sure we can all agree, that was probably the most frightening collection of ideas ever committed to the Internet.  Let's hope that a bigwig film producer gets hold of these ideas and incorporates them all into a Halloween blockbuster.  Let's also hope that he pays me, handsomely.

In other news, eccentric son of the Internet Rob Z Tobor, has kindly given me this accolade: 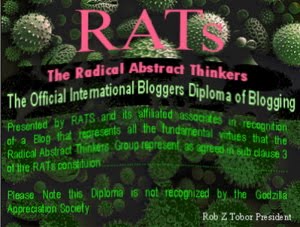 This certifies that I am a Radical Abstract Thinker, which gives me something else to put on my CV underneath Secret Lemonade Drinker (if you get that joke, you're too damn old!).  Anyway, if you sometimes think radical abstract thoughts, perhaps you would consider reading his Blog.  He's been popping up on my Sexy People feed on a daily basis for months, and now you've got no excuse not to visit.  Do it now!