Thank you for becoming the proud owner of a Daemongrill666, the last name in searing decomposing animal flesh.  By purchasing a Daemongrill product, you are hereby declaring that you are fit to operate the equipment and will maintain it with the utmost care.  Daemongrill do not offer repairs or refunds on improperly maintained grills.

You’ll soon be chargrilling cow chunks all the way to oblivion and back, but before you operate a Daemongrill, here are some handy hints as to what to expect:

Firstly, you may notice that the Daemongrill doesn’t have an electrical cable or a gas connection.  You don’t have to worry about power with the Daemongrill, we’ve already taken care of that for you.  It’s a complicated process which includes vast ritual sacrifices from hundreds, if not thousands of those damned souls that society has forgotten and abandoned, so there’s nothing for you to worry about on that front. 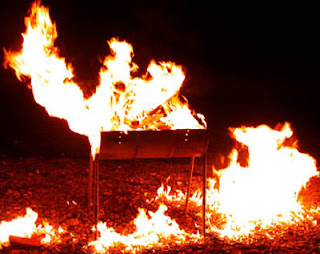 Thirdly, please make sure to keep the Daemongrill clean and free from meat residue after usage.  The Daemongrill acts as a proxy for a sacrificial alter, and improper upkeep can anger the Gods.  Don’t expect to be having corn with that steak because angry Gods make for failed crop yields.

Fourthly, if you happen to burn yourself on the Daemongrill, run the burn under a cold tap for ten minutes, then consult your local Shaman about which herbal remedies can draw out the Devil’s tendrils.  If you begin to grow cloven hooves, perhaps a Witch Doctor would be of more help.

Fifthly, keep out of reach of children.  Daemongrills have been known to erase the mind of a child in order to prepare them as a vessel for when The Ancient One rises from his eternal slumber and renders the sanity of mortalkind in twain.  This can put a real crimp on a child’s day to day operation and may force them to fall behind on schoolwork if improperly checked.

Sixthly, ensure that all kitchen utensils and crockery is safely secured either in a drawer, or taped down to the dinner table.  While operating the Daemongrill, there is a teeny tiny chance that your forks and plates will begin to levitate, rise up, and attack the living, which may net you a low score on Come Dine With Me.

Seventhly, the grill will become restless if it is used to cook the same meat over and over again.  We recommend that on every fifth use, it would be a good idea to grill some exotic meat on there; the rarer the better.  Dolphin steaks are a good alternative, but salamander meat and panda nipples will certainly do the job.

Last of all, have fun!  As our satisfied customers always say, succulent steak is worth the sacrifice.