It has long since been documented by historians that the ancient Egyptians used to revere cats as sacred animals.  These furry felines were treated like Gods and enjoyed a lifestyle of luxury whilst slaves in rags toiled in the baking sun to build them glorious monuments.

Were the cats even grateful?  Not in the slightest.  They couldn’t care that thousands of ape creatures sacrificed their lives through spine-snapping labour to build a likeness of them that wouldn’t even be appreciated.  In fact, cats are the most aloof animal out there.  They enjoy the care and warmth that their human cohorts supply, yet give nothing, not even the slightest fleck of affection or gratitude.  That’s why, in the Internet age, there are approximately 10 bajillion YouTube clips of people’s cats.

Since people are so utterly fascinated by cat antics, I thought I could drive up traffic on this Blog by discussing the world’s most thankless and unrewarding pet.  More specifically, I’m going to review some cats and give them a score out of ten.  The reviews are completely unbiased and impartial, although my lawyers would have me declare that I hate cats and I’m highly allergic to them.  With that out of the way, let’s critique some moggies! 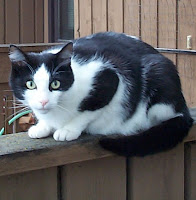 Felix is a black and white...thing.  I’m not sure what breed he is other than he looks like the cat off of the Felix adverts, hence his owners have called him Felix.

Seriously, what’s up with that name?  His owners are severely lacking in imagination.  Why can’t you call him “Lance Thunderclap” or “Supreme Space Emperor Flarg XXII:  Domineer of the Parsec Cluster”?  Hell, even the name “John Major” conjures up more style and charisma than “Felix”.

Anyways, there are a few defects with this model.  Firstly, Felix poops in a litter tray, but fails to clean the litter tray afterwards and doesn’t apologise for defecating in the food-preparation zone that is the kitchen.  He is an indoors cat and as such, requires extra sustenance in the form of cat food.  He can’t even be sustained by regular patches or downloadable content, he requires 2 tins of shredded bovine per day!  He eats better than me, and I thought I had it good last Tuesday when I stirred my Pot Noodle with a Cheesestring!

All in all, Felix is more trouble than he’s worth.  Would not recommend. 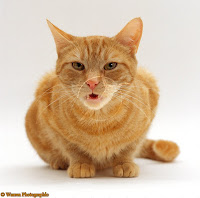 Again, this is another lacklustre name for a ginger tabby.  Since we’re dealing with a red head, you’re missing a trick if you don’t call it “Fanta Face” or “Tampon McBloodClot”.  It makes it a lot more fun when the cat goes missing and you have walk around the local children’s park shouting it’s name.

Name aside, Amber is not actually a bad cat.  She goes outside and mercilessly slaughters the local wildlife, thus providing less competition for when you want to forage through your neighbour’s bins.

The downside is that she often brings the mauled carcasses of her victims into your house and leaves them in the most awkward places, such as inside shoes, on pillows, and in your underwear drawer.  Sure, you may end up with a mangled robin wrapped around your balls as you get dressed in the morning, but at least you’ve found that special something for tonight’s casserole. 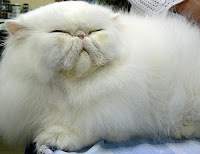 Okay, at least we have an original name this time.  However, Mrs. Cuddlebum makes me want to blow chunks like cooling down your chicken and mushroom soup with a leaf blower.  It’s so sickly sweet, and who on Earth wants to cuddle a cat’s bum?  No matter how often they point their anus at you, you should never cuddle something that could potentially rain faecal matter in your eyes.

In other aspects, Mrs. Cuddlebum is simply lacklustre.  She has too much hair.  This not only means that you can’t appreciate her aerodynamic proportions (rendering her virtually flightless), it also means that she sheds fur like a motherfucker.  If you get a Mrs.  Cuddlebum of your own, be sure to take out extra insurance on that Dyson.  Oh, and buy a Dyson.

Also, I have it on good authority that she’s smothered three babies by sitting on them.

Well that’s three horrible critters critiqued and rated.  If you would like me to review your cat simply package it up and send it to me.  I can’t guarantee that all review models will be returned due to our strict stress testing procedures.  Also, if anyone can recommend some strong antihistamines, I’d be more than grateful.
Posted by Adam Lloyd at Monday, February 18, 2013