It is my sad duty to report that Pope Benedict XVI has, within the last few hours, announced his retirement as head of the Catholic Church.

Let that sink in for a moment.  That’s right, the Pope has resigned.  He’s the first Pope to not die in office since the 15th Century.  Most Popes keep on truckin’ through illness, alzheimer’s and inherent lunacy until God himself arrives and plucks him off of his jewelled stool.  So what gives?

The official line seems to be ill health.  Here’s the Pope’s statement: 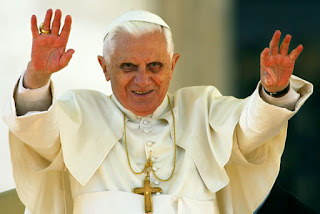 I have convoked you to this Consistory, not only for the three canonisations, but also to communicate to you a decision of great importance for the life of the Church. After having repeatedly examined my conscience before God, I have come to the certainty that my strengths, due to an advanced age, are no longer suited to an adequate exercise of the Petrine ministry.

I am well aware that this ministry, due to its essential spiritual nature, must be carried out not only with words and deeds, but no less with prayer and suffering. However, in today’s world, subject to so many rapid changes and shaken by questions of deep relevance for the life of faith, in order to govern the bark of Saint Peter and proclaim the Gospel, both strength of mind and body are necessary, strength which in the last few months, has deteriorated in me to the extent that I have had to recognise my incapacity to adequately fulfil the ministry entrusted to me.

For this reason, and well aware of the seriousness of this act, with full freedom I declare that I renounce the ministry of Bishop of Rome, Successor of Saint Peter, entrusted to me by the Cardinals on 19 April 2005, in such a way, that as from 28 February 2013, at 20:00 hours, the See of Rome, the See of Saint Peter, will be vacant and a Conclave to elect the new Supreme Pontiff will have to be convoked by those whose competence it is.

Dear Brothers, I thank you most sincerely for all the love and work with which you have supported me in my ministry and I ask pardon for all my defects. And now, let us entrust the Holy Church to the care of Our Supreme Pastor, Our Lord Jesus Christ, and implore his holy Mother Mary, so that she may assist the Cardinal Fathers with her maternal solicitude, in electing a new Supreme Pontiff. With regard to myself, I wish to also devotedly serve the Holy Church of God in the future through a life dedicated to prayer.


Jesus Christ, what a quitter!  Ill health?  Other Popes have worked even when they're unfit to open a tin of beans unaided.  It's no excuse, Mr. Quitty Von Dropout!

Frankly, I’m not buying it.  Being a Pope is very definition of a job for life, that’s why the Church doesn’t provide a Pontiff pension plan.  At the risk of exposing a conspiracy, I’m going to list several ideas that may have caused this unusual decision.  Let’s blow the lid off of this mother-bitch!

1)     He’s involved in some kind of super scandal.  Considering the guy has survived such scandals as being part of Hitler Youth, and the widespread child abuse which he has helped to cover up, it would have to be the scandal of the century to dislodge this controversial clergyman.  My best guess is that he’s behind the horsemeat scandal that is currently enveloping Europe.

2)    He has become so disenfranchised with his recent foray into Twitter that it has turned him into an atheist.  Let’s face it, any lengthy interaction with your average Twitter user will cause anyone to renounce the existence of a divine creator.  What sane God would allow #YOLO to trend?  Madness.

3)    He was set to announce a radical change to Catholic ideology, so all the Cardinals got together and ousted him.   Perhaps the Pope’s next speech was to be about how condoms had acceptable uses, such as expensive, slimy birthday balloons.  Maybe he was going to announce that dog abortion is okay because animals don’t go to heaven anyway.

4)    His retirement coincides with the release of a new Dan Brown novel.  This could all turn out to be an elaborate ruse by the publishers to promote their newest poorly-constructed thriller.  The Pope will then pen a sequel to it later in the year, thus setting him up for a lucrative book deal when he finally does retire at Christmas.

5)    The Illuminati have grown tired of him clocking in late and doodling in his notebook during meetings.

6)    The Reptillian Space Pope has finally arrived on Earth.  This has rendered our hairy, mammalian meatbag of a pontiff obsolete.  All Popeish duties are to be assimilated by our scaled overlords post haste.

7)    After realising that his word alone can sentence people to the everlasting joys of heaven, or eternal damnation and suffering in hell, the Pope has snapped under the pressure.  It’s too much responsibility for one man to bear.

8)    After 8 years on the job, Benedict XVI has realised that he actually applied for the wrong job in the first place.  He’s spent all this time wondering when his Hair and Beauty apprenticeship would finally start.  Just how many babies do you have to kiss before you get accepted onto the course?

9)    One of the Pope’s friends pointed out that “Pope” sounds a little bit like “Poop”.  Unable to live with the shame, he resigns.

10)   Richard Dawkins made him cry over the phone.


Before you say anything, no, I didn’t run out of steam towards the end of that list.  Every point on there is just as valid as the last one.

Whatever the reason behind the Pope’s departure, I’m sure we can all agree that he’s been the best Pope we can all remember.  Except for the last one.  And the one before that.  Oh, and that crazy guy who lives in a skip down the road who thinks that putting a traffic cone on his head makes him a spiritual leader.  May I be the first to say, Godspeed Mr Benedict.  May your replacement denounce paedophilia in all its forms.


Yes, I'm back.  Thanks for bearing with me, I've had a rough month.  I won't explain myself as it's personal stuff and it's boring for you readers who come here for a laugh.  Rest assured that I'm back and hoping to get into the swing of things again.  I'm going to start by establishing a posting schedule, then I'll be coming to post on your Blogs once again.  Beware!
Posted by Adam Lloyd at Monday, February 11, 2013