What do you call a clown without a circus?  Fucking creepy, as this picture clearly demonstrates: 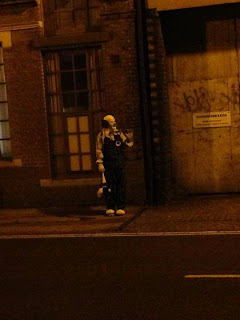 The residents of Northampton have been positively delighted to have this individual skulking around their streets.  The first sightings of Mr Jelly’s friend appeared on Friday 13th, and already the Northampton clown has a sizeable following of thousands online.  A Facebook page documents all of his appearances so far.  He is usually spotted with a teddy bear in hand, peering through windows and waving at passing traffic.

Interestingly, nobody seems to have approached or spoken to him, except for one woman who claims that he turned up on her doorstep and offered to paint her windowsills.  In the report, she notes that he “didn’t have the proper equipment”.  I thought it was common knowledge that clowns carried a squirty flower (could be filled with paint) and a string of knotted hankies (a potential brush), the perfect equipment for painting windowsills.  I bet she kicked herself when she realised that she’d turned down a free clown paint job.

Although his outfit seems to be modelled on Pennywise, the serial killing clown from Stephen King’s IT, he has yet to kill anyone.  In fact, although his behaviour is highly unusual, he doesn’t pose a threat to the public in any sense.  It’s obvious that he’s just a prankster trying to spook a few people, or is just trying to spread joy to the town in the most deluded manner possible.  In fact, nobody knows or understands his motives, which only serves to deepen the mystery.

Either way, opinion on the Northampton clown is polarised.  Some people love snapping grainy mobile camera shots of a terrifying clown in the dark, while others are threatening to beat him up.

Frankly, I think it’s awful to threaten a harmless clown with violence.  If being creepy was enough to warrant assault, I’d be on a daily beating these days.  It’s the same crowd who threaten to attack people because “they look like a paedo”.  Because some rudderless clown turns up in your town, unannounced, to spread joy to the world, people want to kick his head in until confetti falls out?  Nonsense, we should embrace this opportunity and try to learn more about his bizarre clown culture.  To the residents of Northampton, I urge you to invite this man into your home and make him welcome.  Think of it as a cultural exchange type thing.  Offer him a biscuit in exchange for a custard pie.  Ask him if his comically small car is fuel efficient.  These are all questions that need to be answered regarding these mysterious beings. 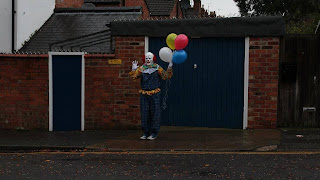 I reckon more towns in Britain could be livened up through the introduction of a clown.   Send in the clowns.
Posted by Adam Lloyd at Friday, September 20, 2013