Yet Another Brain Shit

Hello everyone and welcome to an all new Brain Shit.  For those who haven't read a Brain Shit before, I basically go ahead and write without an agenda and put down the first things that spring to mind.  The only editting I've done is spelling corrections and the addition of a picture.  Please enjoy my unrestrained bollocks:

I’ve been thinking lately about obtaining a parrot.  I don’t want to spend a lot of money, so I’m just going to put glue on my shoulder and wait for one to land on me.  Parrots seem to like landing on shoulders, and glue seems like the best way to snare them.  I’ve caught plenty of pets through similar methods.

I once lassoed a snake which was quite a spectacular feat, and I earned a reputation as the best snake wrangler in town.  This feat was made even more amazing by the fact that there are no snakes where I live.  In the end, it turned out that I caught another piece of rope, but I refused to give back my badge and trophy.  I am still on the run from the law over this misunderstanding.

During my time on the run I’ve learned to fend for myself.  I’ve seen that Bear Grylls chap before, so I know a thing or two about survival.  For example, if you fall into freezing water, the best to keep yourself warm is to strip naked and roll around in the snow.  If it’s not snowing, just roll around the vegetable drawer of your fridge until you’re suitably warmed up.  In fact, I believe that is the Bear Grylls solution to any problem, to strip naked.  If you get attacked by a bear, get naked.  If you are lost at sea, get naked.  If you find yourself without any clothes, get naked.  When I tried this on Clapham high street and was promptly arrested, to which my solution was to get even more naked.  I suddenly developed alopecia while I was lead to the police car.

I mentioned Clapham high street there even though I have never been.  I think it’s on my mind because I watched a programme about a fried chicken shop.  It’s supposed to be a documentary about people who go and purchase fried chicken, however, I noticed that several of the customers had microphones when they walked in.  The show’s producers had obviously chosen people specifically to go in and get chicken so they’d have something interesting to film.  I was planning on making a visit myself to see if I got on the show, but considering their usual clientele consists of 60 year old transvestites who criticise people’s dress sense, I don’t think I’ll get chosen.  Only the chosen few may purchase chicken from this establishment.  It’s the most elitist fast food restaurant in the country. 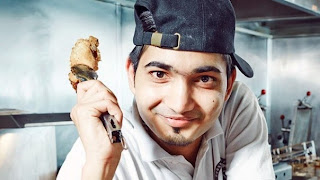 Speaking of chicken, I went to an all you can eat buffet at the weekend called Cosmos.  It served food from all around the world.  There was Indian, Chinese, Japanese, Thai, Italian, British, Vietnamese, Brazillian and I’m sure there are a couple more cuisines available.  The food was actually quite nice, although I did get a touch of food poisoning from something.  I don’t which country to blame my dysentery on.  It wasn’t British for a change as I didn’t eat anything from there.  I get enough chips at home.

I’ve always wanted to travel the world and try different foods.  However, I’m not a huge seafood fan.  I’d basically like to travel the world and try all the different ways they cook chicken.  I’m kind of picking on the chickens.  That’s because a flock of hens once pecked my father to death.  He’s alright now, but it traumatised me as a child.  I went straight into KFC and began a war on poultry.  The Colonel is a good man who wants to destroy all evil avian life, and I want to support him.

This post is very bird-centric at the moment, so let’s talk about alligators instead.  I don’t especially like alligators but I thought it was nice change of topic.  Perhaps we should talk about monkeys instead.  Everyone loves monkeys.  Monkeys are like us but we keep them in cages and peer at them and make them sell teabags.  That’s all I have to say on the matter.

In fact, that’s all I have to say on every matter that ever mattered.  Let us close all discussion and just bask in the infinite silence.  At least until I want to say something again.  Goodbye.

If you enjoyed that, I encourage you to read other Brain Shits like this one, this one, and definitely this one.
Posted by Adam Lloyd at Monday, October 14, 2013