Your Whims And Desires #2

Since the last one was fairly successful (it got some responses), I thought I'd cast out my angling line once again and try and snare a few ideas from the minds of the creative readers out there. As before, people have been nice and forthcoming with subjects for me to talk about, so allow me to address them all:

Jane has suggested this to me several times before, so I felt that it was about time that I gave her what she wanted.

Dating In The Dark is exactly what it says on the tin, making it similar to Blind Date through the eyes of Ray Charles. Three boys and three girls enter a house, but the sexes can only meet in a pitch black room. The idea is that they pair off on the strengths of their personalities alone, even though the contestants are allowed to feel each other up if they are amorous enough to do so (and let's face it, who on a reality show isn't?). As you'd expect, the attractive ones attract the other attractive ones based on verbal attraction, and maybe some blind fumbling, which just goes to show that uglies don't have a chance without the standard-leveller known as alcohol.

The best bit of the show comes when the people are asked to describe their mystery romances to a sketch artist. Interestingly enough, the women managed to depict something that resembled real life, whilst the men might have well just drawn a katamari style ball of breasts and humped it. It just goes to show the intrinsic differences between men and women, and also what 90's TV could have been if Cilla Black wore a particularly powerful pair of aviators.

Sick comedy. Do it justice :)

I assume this is meant to mean boundary-pushing performances, and not laughing as your mate hopelessly expunges his stomach contents all over the kebab he was about to tuck into. Regardless, sick comedy comes in two categories: Great and Shit.

Great examples are the types of programmes that manage to break a social taboo in a thought provoking way. The most obvious and often quoted example being Brass Eye, especially the paedophile special which, whilst being utterly genius managed to present us with something that was rather outrageous at the time. Before that, we had the likes of The Young Ones pushing the envelope with casual violence, political commentary, and the odd swear word. These days we have Sascha Baron Cohen challenging people's preconceptions with his overly offensive stereotypical characters.

Then you have the Shit types, the ones that simply present something repugnant and expect it to invoke hysterics. These are increasingly common with stand out examples being Little Britain, and the detestable Bo Selecta. The former has characters which simply vomit and piss themselves for laugh, and the latter prefers to vomit and piss whilst saying "fuck" 200 times a sketch. These tactics are usually bought in to deflect the fact that the jokes or catchphrases have little to no substance behind them, yer complete set o' basterds yer.

Should Iran blow Israel to fuck and just initiate the fucking inevitable?

As a pacifist and self styled wanky crybaby, I cannot support a war even if it is for the greater good. The problem with Israel is that everybody wants a piece of the hallowed pie that is the Holy Land. What was set up as a tourist trap is now a hotly contested battle ground over a piece of land that is famous for having a street magician being born there. Scientists have suggested that in 2000 years time, apocalyptic discourse will surround Croydon as factions scramble to own the rights to Derren Brown's flat.

Ok, so I'm actually thinking about what I'd do to the scrotes who caused a mother to set fire to a car with her disabled daughter in it.

Disable them, then put them in a car and set it on fire? You know what they say; and eye for an eye makes sales of glass eyes soar astronomically.

Today I read a copy of the Metro, and on the front cover was a mother's description of what she'd like to do to Vanessa George. It read "SKIN HER ALIVE AND ROLL HER IN SALT". Whilst I can understand the repulsion behind what she did (worked at nursery and took suggestive photos of children for a paedophile ring), why do people insist on indulging in these depraved torture fantasies, and why do people agree with them? The average British citizen spends at least 28% of their day telling others what they'd like to do to paedophiles. Here's a quick top three ways to torture paedophiles:

Roman Polanski? Why do we keep coming back to the topic of paedophiles? Seriously though, The Pianist was a good film, but was it good enough to absolve him of his crimes? Only a judge can decide that matter. Have weiner dogs made any films of that calibur? No, although yours could probably star in The Pianist after seeing this adorable photograph: 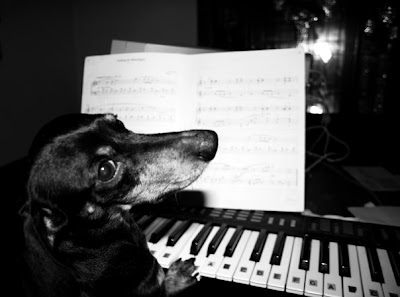 Peace out everyone.
Posted by Adam Lloyd at Friday, October 02, 2009