The other night I went to a Shaun Of The Dead Halloween party.  What struck me the most is how unimaginative some people can be with their costumes.  The party consisted of the following:

Alright, they were just the women's costumes, but the men had some pretty lazy ideas too.  I went as the titular Shaun, as did three other blokes, and I didn't even make my own costume.  Technically, that should disqualify me from making snap judgements about other people.  But if there's one thing you should know about me, it's that I'm a massive hypocrite.  So, I've decided to collect the worst Halloween costumes from across the Internet, and mercilessly mock them here for your amusement.  Here are the 15 absolute worst costumes I could find:

Yabba Dabba Don't.  It's not the costume itself that's the worst part, it's those weird fake feet he's wearing.  Why on Earth would you need fake feet, unless you're starring as a Hobbit in a Peter Jackson epic?  Unless of course, he doesn't actually have any feet, in which case I feel bad now...  Next! 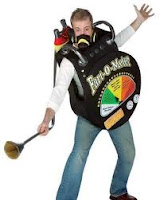 This guy is definitely not the kind of guy you want at a party.  "What's that?  Oh, you've detected that I've done a fart?  How clever!  No, stop doing it now.  No, seriously, that's getting annoying.  Haven't you got any other jokes?  Right, get out!  Now!"

He may look like Ghostbuster who's been assigned more menial duties, but you can rest assured that a guy who wears this is about as funny as a hole in the foot.  Isn't that right, Fred Flintstone guy?  Now I feel bad again... 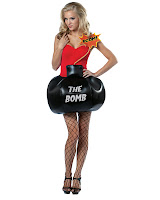 This is the female equivalent of the Fart-O-Meter.  Surely The Bomb didn't sell very well, because it exploits the one thing that women fear the most; the prospect of having a fat arse.  Great idea!  Next year, the makers are planning a costume with cankles. 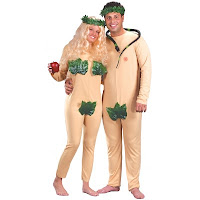 Couples costumes always smack of schmaltzy shitness, but creepy off-colour nudist costumes take it to a whole new level.  You can almost imagine these two wearing these costumes to bed, ripping at those fig leaves in a moment of lust to reveal a soft lump of smooth nothing where their gentials should be.  It'd be like trying to get off with an action man toy. 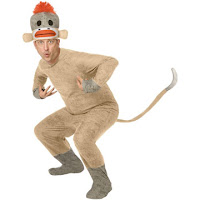 This is just bewildering.  The weirdest thing about it is, I can imagine Dappy from NDubz wearing this as pyjamas.  If you want to dress up as a monkey, there are hundreds of monkey masks and costumes out there that don't look like they've been knitted by a grandma suffering from insomnia-induced halucinations.  Why does the hat have a face on it?  It looks like he either has two faces (one of which has been used for excessive animal testing), or that he has skinned a gibbon alive and decided to wear it. Either way, I suppose it's suitable for Halloween.

I don't understand those trouser things though.  Are they meant to be baggy stockings?  Perhaps gangster suspenders?  This is an ideal outfit for the woman who wants to expose everything, but can't be bothered to shave her legs.

How do you walk in that?  You don't, you swim!  Ha ha-bloody-ha!  This isn't the plaice for fish puns.  If you don't like fish jokes, you'd better sit this one trout.  Have you haddock enough yet?

Fuck that.  The only time I'd want to see someone turn up in a costume like this is on a fishing trawler where a fisherman kills him stone dead with a shovel, then throws him with the rest of the catch. 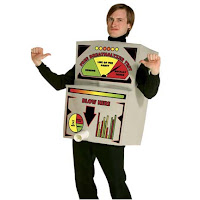 Yet another one dimensional joke costume where the novelty wears off before you've even put it on.  The costume invites onlookers to "blow here", a suspicious looking nozzle near the assailant's groin.  And that's why sexual harassment cases were invented!

What I don't understand is why a teenage Alan Partridge is wearing this costume.  Oh and, if you want people to pay attention to you at parties, try engaging them in interesting conversation, rather than standing in the corner, pointing at yourself in your "hilarious" costume. 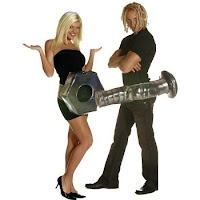 This has all the hallmarks of a terrible outfit.  Costume for couples?  Checks.  Innuendo?  Check.  Poorly constructed?  Check.  Will people punch us on sight?  Check.

It's sad to see that mid 90's European pop groups have to resort to advertising stuff like this.  I'd happily support a Steps reunion if it helped them get out modelling hideous costumes like this.  What?  Steps have reformed?  I take it all back! 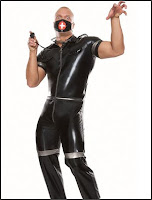 The doctor will see to you now.  It wouldn't surprise me if he turned around to reveal his bare buttocks cut out of those leather chaps.

This outfit is so utterly wrong that it almost seems worth the purchase, just so you know that you own the worst thing in existence, and nothing can ever sink lower.  Actually, we still have another five costumes to go.  Perhaps you should buy those as well.

And now a costume from Germany!  Oh god, why does it have to be skintight!?  Mobile phone cases don't tightly hug the electronics inside, so I don't see why this has to be so clingy.  If I saw this, I'd be tempted to punch in the number of the emergency services, with a clenched fist. 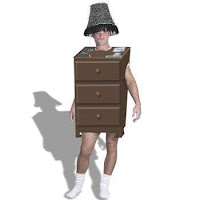 I didn't understand this costume until I saw the title.  At first I thought it was a shit costume of a bedside table and I was going to include it quite low down on the list anyway.  When I realised what this was meant to be, it was quickly elevated to "So Awful You'll Attempt To Invent Faster-Than-Light Travel Just To Get Away From It" status.

Loving the socks though.  Any right-minded woman is going to be driven wild by those bad boys. 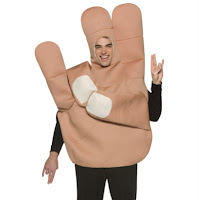 Here's a shocker for you, you're not funny or interesting!  Next year's costume idea; a teabag! 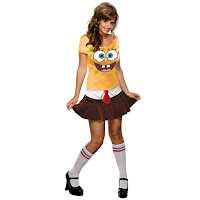 I'm not sure if that's the real title of this costume, but that's the general vibe I'm getting.  A decent spongebob costume would involve, I don't know, slightly resembling spongebob in any way?  Perhaps it could at least be square?  Of course, this way you can be spongebob and cause men to instantly spout collosal erections over you, which is 100% guarenteed to happen in this!  Honest!

Unlike the leather doctor, this one does actually expose your arse cheeks at the back.  Great news, especially when you want to dress up as a cartoon baby!


After those monstrosities, all I can say is, thank god it only comes once a year.  In fact, if you're wearing those costumes whilst hoping to get a date, you'll probably come less than once a year.  Have a great Halloween everyone!