I think it was Plato who once coined that immortal phrase that haunts the front of our t shirts, “pugs not drugs”.  Since Plato was a massive crack and opium fiend, his love for our wrinkly little friends must have been rather overwhelming to give up narcotics in favour of their squinty little faces.  His slogan still resonates today.  Everywhere you turn these days people seem to be enjoying pugs.

I, on the other hand, couldn’t care less when it comes to pugs.  Their faces look like my scrotum, and yet there are virtually no women willing to carry my scrotum around in their handbag.  In fact, said women tend to call the police when I attempt to teabag their Louis Vuitton’s.  In that regard I am highly jealous of pugs.  I just don’t see the appeal of a squashed, sub-intelligent creature that can’t walk unaided for more 20 minutes and suffers from eye prolapses.

That’s why I thought I’d review some pugs.  It is my intention to try and underscore their crapness through rigorous and prolonged critique.  Please see the following abominations: 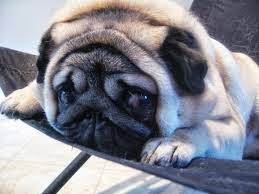 Personality:  3/10 (when not asleep, favourite activity is going boss-eyed)

Mileage: 0/10 (prefers to be wheeled around in a cart)

Brucie is probably the laziest pug I’ve ever seen.  When he’s not snoozing away, the only other thing he does is look at me hungrily.  At least, I think he’s looking at me.  Brucie steadfastly refuses to walk anywhere because he is too used to his owners carrying him around in a bag.  I’m not sure that Brucie has ever learned to walk.  While most people think he’s pretty dumb, I reckon this is all an act to try and avoid any sort of physical exertion.  If I could persuade giant apes to attend to me every whim and desire, I would be just like Brucie.  Unfortunately, it makes him about as interesting as a movie franchise reboot. 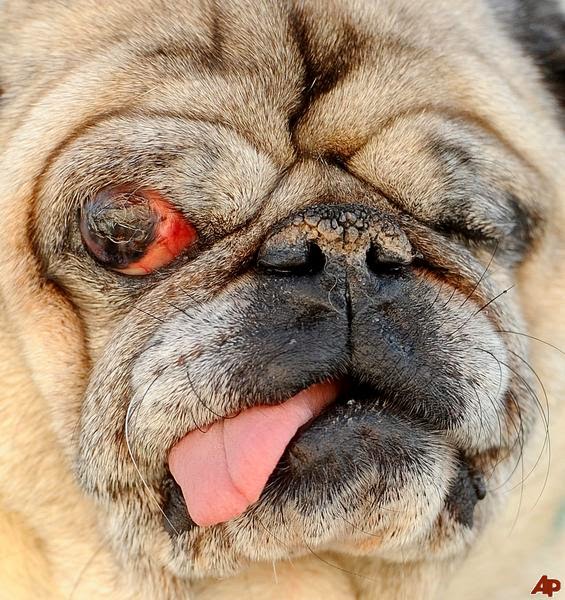 Mileage: 4/10 (can walk across a room without an asthma attack)

Intelligence:  3/10 (no notable tricks to speak of)

Maggie doesn’t have a whole lot going for her to be honest.  If she was a human in Edwardian England, her family would accept an offer of half a pig for her hand in marriage.  All she does is bark all day long.  When I say bark, it sounds more like someone squeezing out a high-pitched fart into a glass of water.  On the plus side, physical activity doesn’t outright kill her, and she has been seen trotting across the room to bark at a houseplant or a chair. 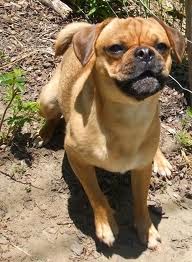 Intelligence: 0/10 (couldn’t even get a job at McDonalds)

I’m pretty sure that Chuppa once starred in a cartoon about a Tasmanian devil and his closest kin.  Technically, Chuppa is a Jug; a Pug and Jack Russell cross breed.  This gives him a double dose of small dog syndrome, making him a nightmare to control or even be around.  However, he doesn’t look like someone has stepped on his face, so that has to count for something.

Well, that was fun wasn’t it?  I think I might branch out and insult more than just pugs.  If you’d like me to critique your pet, just send me a picture to addman_00@hotmail.com and we’ll see if beauty really is in the eye of the beholder.
Posted by Adam Lloyd at Friday, July 04, 2014