Your Children Are Cunts

Stop reading this and look at your kids for a second. Go on, give them a cold, hard stare. Finished? No doubt they are hooded, hunched over with a brain melting gadget in one hand and picking their arse dry with the other. These teenage troglodytes will doubtlessly transform into murderers in a best case scenario, and there's nothing you can do about it. If they use their riot-inciting websites to form chain gangs together, you'll be helpless against them. That is, unless the government takes control and does something about them.

This is where David Cameron steps in. A snakes piss salesman knows when to strike, and Super Dave's campaign against young people has started in earnest now that teenagers have been successfully identified as the cause of the riots. Bravely speaking from a youth centre in his home constituency (a youth centre on the verge of closure, might I add), the Prime Minister set about his well planned, totally rational ideas to turn the lost generation around. This includes:
Even as he laid out these marvellous plans for the rebuilding of our society, a bunch of puss faced serfs had the nerve to heckle him. This was probably because he'd accidentally spilt some of his fine, Tuscany foie gras down his slacks as he flew back from holiday just in time to see the riots come to an end.

Demonisation of the young is an old Tory fallback when things start to get hairy. What is surprising though, is just how draconian Cameron has become. Whilst in opposition, Cameron had a tendency to play to the younger demographic. Every press event, camera opportunity, and public event would see Cameron surrounded by more children than a chocolate covered paedophile dressed as Buzz Lightyear. Teenagers were always purposely positioned behind him at press conferences, and he spent more time in youth centres than the staff (especially now they are out of work). All of a sudden, when young people have realised that Cameron's crew are working around the clock to make sure that they can't get jobs, can't get into university, can't find a house, and won't have anything to live for, Cameron has started a hate campaign against them to keep them in line.

After spending so much time trying to be a Progressive Conservative (which makes about as much sense as char grilled ice cream), and having dinner dates with dirty-mouthed rappers, it has to be the most head spinning change of tack for a politician in recent history. He couldn't have turned coat into a more Thatcherite politician if he had started eating fox chunks drizzled in plebian tears.

It was obvious that this was just a mask all along. However, turning so dramatically on the very people you pandered to is just poor form. If children are the future, Cameron is walking in an apocalyptic wonderland. 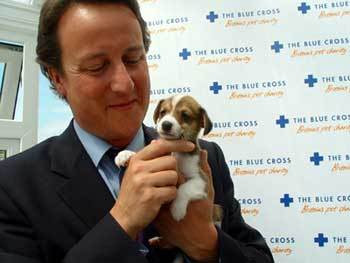