It's not everyday that someone designs you a mechanical death contraption, so when it happens you know it's going to be an extraordinary day.  That's what happened last week when my delightful brother-from-another-dimension, Rob Z Tobor, drew up this masterpiece: 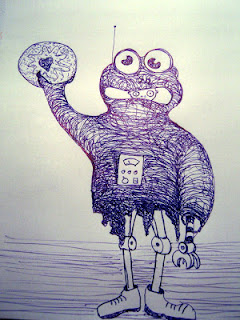 That, my friends, is a blueprint for a giant mechanical Addman.  Notice the Jammie Dodger in his hand?  That is a laser-guided laser system capable of firing lasers.  With Mr Rob's dilligent efforts, I shall put these 100% mechanically plausible design plans into mass production.  Anyone who pledges allegiance now shall be spared.

Of course, this overdue revolution wouldn't be possible without a big thank you to the eccentric child of cyberspace, so I encourage you all to read The Eccentric Diary Of Rob Z Tobor right now.  Or you can stick around and read the rest of this post first, then visit his Blog.

This act of generosity got me thinking.  Are there any other Bloggers who I owe a big thank you to?  Anyone who has inspired me, made me laugh, offered kind words of support, and generally been active around here deserves a thank you.  I don't say this a lot, but today I'm feeling soppy, sentimental, and will probably give you all a girly kiss on the bottom.  Actually, I take that back.  Nevertheless, I'd like to thank the following people.  Whether they know it or not, they've helped me keep Muppets For Justice going, mainly because I'm trying to compete with them in some pathetic manner:

Thoughtless Gibberish - Bumferry Hogart is a great guy who contributes the mighty fine voice of Hugh Huxley to the podcast (which shall be returning soon!).  His Blog is always funny, he's up for anything, and deserves more attention.  Go and follow him, if you know what's good for you.

Chiz Chat - Chiz has contributed several times to this Blog and he is never less than hilarious.  A surge in popularity might encourage him to post more often, so let's make it happen!

Beer For The Shower - Great cartoons, great writers, great...everything.  The Beer For The Shower boys are some of the funniest writers I've ever come across, and that's not to mention the excellent sketches contributed to my podcast.  More than worth your time.

Pickleope - What's green, has antlers, and is frightened to death of dolphin rape?  That'd be Pickleope, the world's funniest pickle since Pickleoctopus, the philandering clown.

The Rambling Person - Mark runs a candid Blog about writing and life in general.  Support Mark in his bid for writing supremacy!

The Incoherent Ramblings Of A Moose - Not a "mom blog".  Involves tales of infanticide and extreme humour.  A must.

Point Counter-Point Point Point - I've not been following this one for long, but I love the back and forth banter between Christian and Pat.  Presented as a debate, their posts are hilarious, intelligent and interesting.

Elton Says Things - The crudest Blogger I know, which is definitely a good thing!  Also, he designed that lovely Muppets For Justice banner at the top there.

Ash-Matic Does Things - The way in which Ash-Matic writes about the things he does leaves me in jealous contempt.  That means he must be excellent.  A great writer and a funny guy to boot.

If I haven't mentioned your Blog, that doesn't mean I don't like it.  In fact, I probably love it!  However, there are far too many to list, so thanks to you all for reading my stuff and putting up with me.  If you'd like to suggest a few worthy blogs in the comments below, please do so, even if it's your own.  I'm looking to expand the Blogs I read and would welcome suggestions.  Let the shameless self promotion begin!
Posted by Adam Lloyd at Friday, July 12, 2013