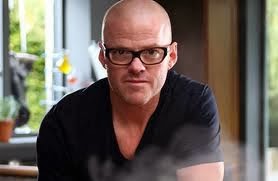 Hi mothercookers!  It’s Heston Blumenthal here.  You’ll probably know me as that loveable scientific TV chef.  Others may know me as the world’s foremost Harry Hill impersonator.  Regardless, I’m here to teach you some wonderful Christmas recipes that I just made up straight from the top of my dome.

Now, we’re all sick to the back teeth of traditional Christmas food.  Turkey is the least popular bird since Rod Hull’s Emu ended up on Operation Yewtree.  And the less said about yucky sprouts the better (or as I call them, the Devil’s Haemorrhoids).  So, I’m here to teach you how to make some alternative, interesting, and sciencey foodstuffs to dazzle your friends and family with this festive season.

Recipe:  Take your sugar paper and draw cute, Christmas designs all over using your food colourings and a paint brush.  Draw some Christmas trees, mistletoe, or a shopping centre Santa getting kicked in the bollocks by a petulant child.  Once done, deep fry your child’s Christmas present (in my case, a PS4), then wrap it up with the sugar paper and use flattened marzipan as a ribbon.  Present the gift with some liquid nitrogen for extra gravitas.

Recipe:  Take your first bird by the head, and shove it up the arse of the next bird.  Complete the chain until you have a fully joined circle, creating an ouroboros of cruelty.  An avian centipede.  A duck-dynasty daisy-chain.  Cook in the oven for three to six days, then serve on a bed of liquid nitrogen for a cool, funky effect.

Recipe:  Take your raw gammon joint and slam it down on the table in front of your startled diners.  Take your blow torch out and heat the gammon to around 2000-2500C, until it becomes runny and pliant.  As the resulting mess begins to drip off of the table, throw in some liquid nitrogen to give it texture, then allow your diners to drink the meat through their curly straws.

Recipe:  For those Christmas traditionalists who want to put a little spin on the usual Christmas dinner, why not just do a giant version.  That’s basically what I do on my TV show, just make gigantic versions of normal food, then prance around like I’m an unholy cross between Willy Wonka and Moby.  Throw in some liquid nitrogen because it is an essential ingredient in any recipe, and Bob’s your new, creepy step-uncle who tries to watch you change.

And there you have it, four sumptuous Christmas feasts fit for any deranged, inbred King.  I wish you all a glorious holiday season, and I pray to God that you don’t watch Gordon Ramsey’s cookalong on Christmas morning, you heathen bastards!  Tally bye!

For those of you looking for a little more, I encourage you to read Bumferry Hogarts latest Blog post, in which he interviews a very handsome character about his upcoming book. You can view it here.  I hope you'll find it to be as amusing as we found it to be, and follow his Blog while you're at it because he's a talented, funny guy.

Other than that, that's it for 2013 as Muppets For Justice will be closed during the Christmas season.  This is partly because I have the long-awaited eBook coming out on the 3rd of Jan which I have to prepare for, and also because I will have family commitments that will keep me away from Blogging.  Until then, I wish you all a very merry Christmas and a happy New Year.  Normal service shall resume on the 3rd.
Posted by Adam Lloyd at Monday, December 23, 2013