As we forge forever forward towards new and exciting musical frontiers, we are establishing new genres and forms of music constantly.  This rate of discovery is occurring faster than we're unearthing tropical skin diseases in the rainforest. But as we create Dubstep, Grime, Crunk, and other various forms of high art, we are in danger of forgetting older genres.
For example, when was the last time anyone wrote a really good Cockney music hall song?  You know, those jaunty jigs about your old man working as a dustman and losing a cabbage under the wheel of a moving train.  Well, no one seems to have created a new music hall song for many years, so I thought I'd give it a try.  Someone needs to try and revitalise this dying genre and make it relevant again.  Here are my attempts: 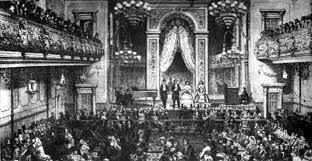 When I were but a growing lad,
I played with me threpenny bits,
Me father clipped me round me tabs,
And said that job was his,
One day I held me toilet,
From Kings Cross to Waterloo,
But when we got to Charring Cross,
I did a big fat poo,
I said uppers, downers, stick 'em down your trousers,
Royal Britannia,
Broiled sheep and figs,
The Bosch came over 'ere and bombed our pigs.

As you can see, not only is this song relevant, it also has a hint of racism in there.  This can be forgiven in music hall songs because we were getting pelted with explosives by those very same people, which tends to provoke a grudge.  On those lines, I wrote a couple more:
One day me ration book got wet,
It fell into a puddle,
Me father went to get some bread,
And got into a kerfuffle,
Corned beef hash on Tuesday,
And on a Wednesday too,
When Thursday and Friday come round,
I'll have a corned beef poo.

As you can see, dysentery is a recurring theme in music hall, and I tried my utmost to reflect that.  let's have another:
Me uncle liked to wear a dress,
And call himself Mable,
But when he heard propellors overhead,
He'd join us under the table,
Nothing is funnier than a man in a dress.  Nothing.

Slap your knees at Aintree,
But try not to look queer,
If your father's back from t'war,
He'll probably give you a fat ear,
Then he'll batter your brother in an alcoholic stupor while reliving the horrors of battle,
Domestic abuse is an absolute goldmine for cockney songs,
Der der der der der HEY!

Someone nicked me bucket,
Now what am I to do?
I went off down the cop shop,
And reported it to Stu,
He said "Son, there ain't no hope
of capturing this rum 'un,
but you want some vigilante justice,
then borrow my truncheon"
So I went round all me mates,
While pulling up me britches,
And if I found they had a bucket,
I kneecapped those sons of bitches,
Have a banana!

Oooh, he lives in a house a very big house in the country,
I feed the pigeons, I sometimes feed the sparrows too, it gives me a sense of enormous well being,
WOO HOO, when I feel heavy metal,
There's no other way, there's no other way,
Always should be someone you really love,
As I'm sure you'll agree, I have made this genre of music relevant to kids today.  Move over Miley Cyrus, the cock-er-knees are coming through.  'Ave a banana!
Posted by Adam Lloyd at Monday, February 03, 2014