Possibly The Best Video Games In The World

You may or may not know that I'm a man who enjoys his video games. I've put off doing a video game related blog for much too long, because I feared that I may alienate people due to my obscure gaming habits. Even the most hardcore gamers may be intimidated by my vast repertoire of indie games, unreleases, and exclusive titles that would make even the most avid collector uncontrollably shed tears of wonder. Nintendo have a warrant out for my arrest after I acquired several Beta versions of Mario Paint 2: Love Shack from their production lines, shortly before they were scrapped, and that's just the tip of the iceburg, my friends.

Now is the time to unleash some of my most prized games, and you shall soon see why I, above all gamers, hold the title for "Most Smug Git 2007". You mere mortals shall tremble upon my unconquerable mountain of never seen before titles:

This was set to be one of the first Playstation2 games upon launch, which involved sneaking into celebrity weddings, taking photographs, then selling them to the fictional women's gossip magazine, Flaps. You could earn extra cash if you managed to get the perfect shot of the bride's labia. The game was pulled before release due to the inherent themes of privacy violation of the press, which one newspaper pundit quipped "Would be just bad press".

Curse of the Pokemon Kombat

You may think that pokemon originated on the Gameboy, and if so, I laugh at your stupidity. Pokemon were first invented during an initial design for Mortal Kombat 4, and then moved into this spin off version. Basically, each fighter has their own pet, which they can use to execute a deadly finishing move that is more grusome than a wrestling match between Joan Collins and an incontinent yak. In this game, Goro can unleash Pikachu to insert himself slowly into an opponent's rectum, and slowly electrocute them from the inside.

The first of what would be a series of Jackie Chan games. Originally designed for the Mega Drive, this game involved Jackie Chan conducting an orchestra of classical musicians with a series of high kicks and stunts in the first ever rhythm game. The violin players are stationed in forklift trucks, JCB diggers, and Killdozers, so if you do poorly, they will ram Jackie Chan repeatedly.

The Castle of Shaving Yoda

This was meant to be a Star Wars themed game to rival Mickey Mouse's Castle Of Illusion. The title is actually poorly translated and misleading as there is no shaving of Yoda to be done in this game, you have to shave Chewie instead.

Everybody Hates the Walrus Planet

An evil race of buck-toothed Walruses have colonised Mars and now have their sights set on Earth. Will you take up the call to arms? This is a PC strategy game which involves launching nuclear weapons at Mars as invading Walrus fleets attack your turrets. It's like a 3D Space Invaders with flipper-slapping sound effects. The game is only available on Mac, so none of you losers will ever play it.

:Note: Video games in this article may be ficticious and am I not responsible for any misdeeds

Thanks to the Video Game Name Generator for supplying the idea for this article.

Funny Picture Of The Day: 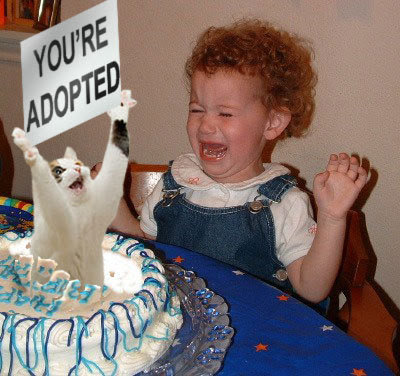 Email ThisBlogThis!Share to TwitterShare to FacebookShare to Pinterest
Labels: Games, Pic Of The Day