A Shot Of Tequila With Tila

First off, hello again to those receiving me from Facebook. If you want to stay current with my latest updates, you can subscribe to my Notes feed, which will save me having to tag fifty of you every time a post is automatically uploaded. Anyway, on with the show.

I happened to be watching E4 about a month ago when I came across a reality show called "A Shot At Love With Tila Tequila". This will probably be old news to anyone from America as it first came out there in 2007, but this was the first time I've seen it. 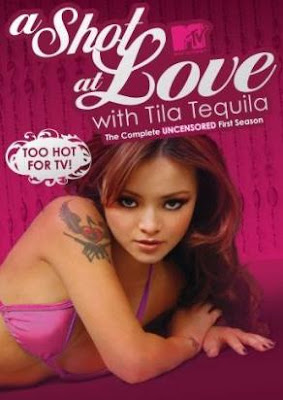 Now, I've come across Tila Tequila before, and even written a rather scathing review of her hideous music, but I never expected to see her appear on my tellybox any time soon. Because I remembered how awful she sounded (musically, and as a human being), I found myself watching the show out of curiosity. It was like reminiscing fondly about a tropical disease.

Naturally, the men of the group were upset to find that they'd have to compete with people who they aren't allow to punch. They whined and complained enough to make them look like babies, despite their muscular physiques constantly on show (not a single t shirt in sight here), however, the women were even worse. Most of them looked like drag acts and the only part of their appearances that were real were the fur coats that they'd packed into their suitcases. Even for someone like Tila whose artificial chest looks like a dog with eye strain, these were soulless individuals who could only communicate in what I would describe as "Insipid-lish". Most of their comments were gems such as "Tila gon' pick me cus am hawt an ah know whut a girl needs" or "Ma pussay tastes soooo good!" (ok, maybe I'm paraphrasing a bit too much, but you get the picture). 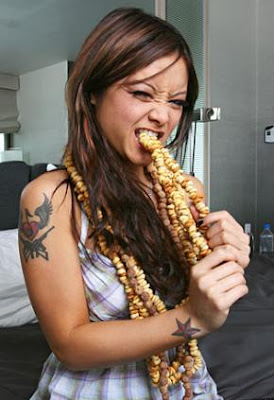 purely because they were on camera, and the argument was so incomprehensible that the average viewer would become dizzy just trying to figure out what caused it.

So anyway, the show finished and I was left startled and confused. The dawning realisation that I had just watched the worst show in the world was a lot to take on as I struggled to find one redeeming quality of the show.

A few weeks later, I saw a trailer for a new episode. This new episode involved one woman attacking another because she'd been voted off, Tila making a big drama out of it and saying that she needed time to think, then straight away judging a bunch of people rolling around in mud for her pleasure. She was obviously very traumatised that a girl felt so strongly about sleeping with her that she'd willingly attack someone else on camera for the chance.