Although it’s been said many times, many ways; I hate Facebook.

It wasn’t always this way. A few years ago, Facebook was one of my favourite things on the Internet. There were fun times to be had with humorous status updates, catching up with old friends, and insulting people on various extreme right wing groups.

Back in 2009 I started using the Notes feature to automatically import posts from Muppets For Justice directly onto my Facebook profile. You just simply pointed it at your URL, and it created a Note everytime it detected a new post, then alerted all of your friends to it. This was a brilliant automatic feature. For a long time I had two small communities following the stuff I’d written, one on Blogger, and one on Facebook which my family and friends read.

Then, the evil Lord Zuckerberg noticed that Facebook had become an Internet sensation. Hundreds of millions of people were logging on every day to tell the world what they had for dinner, or to insult their boss after adding their boss as a friend, and this pleased Zuckerberg.


﻿
Despite his billions from advertising revenue and millions of loyal minions, he still found himself worried by a new social network launched by Google, appropriately named Google+. This angered the Dark One. How dare someone try and emulate his success? It’s not like he’d ever taken elements from other people’s websites to try and improve his own. Facebook Chat is in no way like other IM programs such as MSN Messenger (or as it’s now known, Live. God, that makes me feel old). This new social network would have to die. Sitting in his crimson citadel of the damned, the Demon Prince Of Teh Internets began to formulate a plan.

Fast forward a month or two, and Facebook suddenly drops its support for importing posts from Blogger (a Google company). For someone like me, that meant my readership was instantly cut in half. By way of apology for this heinous crime, Facebook cheerfully announces “you can always link people to your Blog through status updates”.

Thanks a fucking bunch for this helpful fucking feature you fucking fuckity fuckers! I’m so pleased that a beautifully automated process has been replaced with one which requires me to manually pester my friends and family like an extreme version of Nathan Barley.  As if people don't hate me enough!

So, there I go, laboriously posting a link each and every time I update (and yes, my problems are just as important as third world famine), when suddenly, Facebook informs me that I cannot post links to Muppets For Justice any longer, as it has been reported as "offensive".

On another note, have you noticed that Facebook tends to display updates from people you don’t really like? According to my extensive research (i.e. a video that someone showed me), there is an algorithm which calculates how often you interact with certain people, and then shows you the status updates the people you are least interested in. It would seem that this is an effort to stop you from neglecting your least favourite friends. However, what this fails to realise is that there’s probably a strong case for not talking to those people very often. Perhaps it’s the annoying way in which they post every minute detail about their moronic children:

“shaneliza jus woke up an puked on herself!!! shes so clever!!!!1 i love mine princess foreva neva forget babydoll loves always!!!!!!!!!!11”

Or maybe it’s the moronic way in which women that end up in bad relationships end up posting things like this on a monthly basis:

“stupid fuckin men r all the same!!!! much better off single wiv my baby girl shaneliza huw i luv more than life itself!!!!!!” 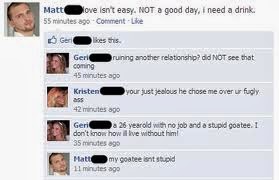 ﻿
I hope that one day these people will realise that, in a moment of self reflection, the only constant in their failed romances is themselves. The fact that Facebook tries to cram more of this junk onto my screen is one of the most annoying aspects.

Oh and in case you’re wondering, yes I will still be using Facebook, yes I do have a tendency towards hyperbole, and yes, the rages are becoming more frequent.  Next time, a rant on how much I hate reaching for the remote control.  I can feel a lie down in a darkened room coming on. And a wank.
Posted by Adam Lloyd at Friday, January 20, 2012