-Unfortunately for you regular readers, I am on holiday this week.  However, it seems that things have worked out in your favour because, rather than trying to understand my usual inane waffle, you've got someone with talent to fill in instead.  The post below was written by the wonderfully marvellous Pickleope.  For more pickled goodness, go and visit Pickleope.com.

First and most importantly, thank you to Addman for this opportunity to share his space. I appreciate the generosity and the help in getting me closer to be a professor of bullshit. (If you write enough about stupid stuff, they give you an honorary degree, right?)

It was whilst reading Muppets for Justice that I read about Addman’s dream of becoming a Cryptozoologist. And I would like to help him. Though it’s not exactly cryptozoology, ghost hunting is a similar I’m not sure if ghost hunting is the same thing, but it’s a similar profession wrapped in bullshittery.  Perhaps he can start a new career as professional shoveller of nonsense if he can answer my paranormal quandaries.

Tangent:
By the way, “paranormal quandaries” would be a great, albeit confusing, name for a proctology office. “My poop is in the shape of an uppercase Q and whistles ‘Call Me Maybe’ when I flush. I think I need to see my proctologist over at Paranormal Quandaries.”
End tangent.

Here are some of the things I can’t figure out about ghosts despite watching Ghostbusters almost 90 times (almost because I was kind of drunk the last time and passed out before Dan Aykroyd gets a hummer from a ghost…weirdest scene in any movie ever).

Do ghosts think Halloween is racist against ghosts? You know? Like is wearing a sheet the equivalent of black-face to a ghost? Like a ghost minstrel show?

How come there aren't any monkey ghosts? And would a monkey ghost be as cute and charming as a living monkey?

What's the appropriate amount of time to wait from when a spouse dies to try to have sex with his/her ghost? You know, rock that ectoplasm? “Til’ death do us part,” is a convention of the close minded. If my spouse comes a-haunting, I would like to make sure that we’re still simpatico. Maybe ghost/human sex is the best thing ever, but also, I don’t want to freak out the freshly dead. So how long should we give our dead partners to transition before lighting some candles, putting on some Luther Vandross, and letting nature take its course. Also, do I have to worry about pregnancy or STDs with ghosts? I don’t want ghost-Herpes.

If ghost-Tupac meets hologram-Tupac would that destroy the space-time continuum? (That’s a question from my mom. She saw that clip on YouTube while she was toking off a giant blunt.)

What's funnier, a ghost dressed like a wizard or a fat ghost in an ill-fitting shirt and Daisy Dukes? (That’s my mom asking again. She smokes a lot of weed.)

If I want to be a ghost should I just have a lot of unfinished business? Like maybe start a bunch of craft projects and leave them in a closet? I’m not sure if I’m righteous enough to go “up” so to speak, but I certainly don’t want to go to Hell, so maybe I should split the difference. (I just wrote that and realized I was okay with writing “Hell” but squeamish about writing “Heaven”. Sorry, just a weird insight into my madness.)

Do ghosts use the bathroom? Elvis died on the toilet, so is he locked in eternal poo?

If we get to keep your clothes when we die (you never see a naked ghost), should I start dressing like Spider-Man all the time just in case?

I think the idea of a ghost in a Spider-Man outfit is a perfect place to go out on. Thank you again to Addman, a gentleman and a scholar. 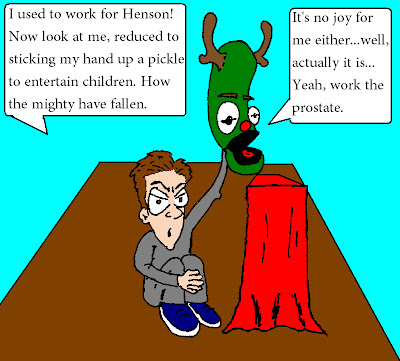