Stupid Shit In My Brain

Some of you may have noticed that I often write about childhood. I also often write from a childish perspective, but that is more purile humour than a stylistic choice.

I do this because I have a strange memory. I remember certain segments of my childhood very vividly, and yet, can barely remember what happened yesterday. As such, there's a whole.swathe of stupid shit that sometimes bubbles to the surface of my mind. Most of it has been lost to the sands of time, and people look at me weird if I bring them up. Some folks think I'm making this stuff up, even if we were the same age when it was happening, or even saw it together. It makes me feel a bit perculiar when I remember something so well, and yet someone else cannot. Let's run through a few examples:

Kick, punch it's all in the mind,
If you want to test me I'm sure you'll find,
That the things I'll teach ya are sure to beat ya,
But nevertheless you'll get a lesson from teacher,

I sing this to myself whenever I chop onions. As I said, I never owned the game and don't know anyone who did own it. However, I remember a friend had a demo for it and I played it once. I must have learned it in that one sitting, then my brain conjures it up when I'm faced with onions.  Bizarre. 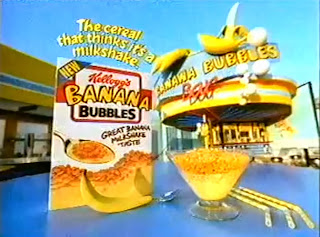 This is a breakfast cereal that had a very limited run in the early to mid-ninties. Why I remember it or it's jingle is a mystery since I never ate it or even wanted to. I didn't even like banana milkshake, so why is this in my head?  Probably because, even at the tender age of eight I could see this was an abomination.

Everyone remembers Power Rangers, especially since they're still going strong today. However, no one seems to remember these poor rip off shows.  I'm pretty sure these were shown during prime time kids TV slots, probably between series of Power Rangers.

The Coco Pops jingle is one of those brain bugs that pops to mind whenever I don't have anything else going on in my head.  I must be a slave to Kelloggs or something, since their jingles take residence in my head.  Even that little twinkley thing they do at the end of their adverts makes me want to shout "I'D RATHER HAVE A BOWL OF COCO POPS!"  Also, why do their adverts feature a camp ostrich?

That's all I have time to mention right now, although I'm sure there are loads more I could probably think of.  What about you lot?  Is there anything you distinctly remember that everyone else has forgotten?