I’ve been in the maid game for a long time.  I’ve been a regular maid, scullery maid, and even a minute maid, but nothing compares to the thrill of being a tea maid.

What’s so great about being a tea maid when compared to other types of maid?  You don’t have to wear the frilly uniform for starters.  Not that I mind the uniform, it’s just the hurtful comments that people tend to make, especially when they tell me that I don’t have the legs to pull it off.  Being a tea maid is definitely better for my self-esteem.

I always found the work very rewarding.  I used to love seeing people sipping on my warm, murky excretions.  They never thanked me verbally, but the satisfied smacks of their lips as my piping hot liquid slid down their gullet is thanks enough.

Being a tea maid was a career that I could see myself doing for life.  Considering the vast scatter-diagram that is my employment history, you could say that was quite a commitment on my part.  I would always work extra hours without overtime.  In fact, I was quite called upon to serve tea throughout the night to my benevolent employer.  I make tea, therefore I am. 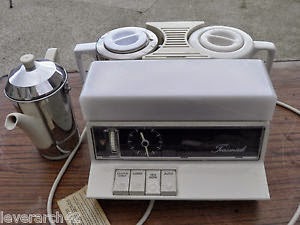 I felt violated.  I’d never been treated like this before.  But most of all, I was worried that I wouldn’t be able to perform my tea making duties to the best of my ability.  Making tea to a satisfactory degree while missing an arm was far more difficult than I thought it would be.  My employers were not particularly satisfied with the tea I mustered.  Gone were those satisfied slurps that I lived for, instead replaced by grimaces and spluttering.  I struggled to mix the milk properly, leaving a creamy residue around the rim of every mug.  I didn’t get any sick leave to recover, nor did I want it.  Every effort I made to improve my tea seemed to just make things worse.

That weekend, I was minding my own business by the fridge, when the master returned home.  He set down a shiny new box on the kitchen counter and began tearing into it with eager anticipation.  I couldn’t quite see what was being unwrapped, but I watched with keen interest until the master finished the unboxing and stood back.  I was shocked.  They’d bought another tea maid!  A shinier one which could make tea quicker than I ever could when I was healthy!

Before I could wrap my head around this betrayal, I was promptly stuffed in the now empty box.  That was the last time I saw the master, and the last time I saw daylight.  After some banging around, I don’t think I’m inside anymore.  I can hear seagulls in the distance, and there’s a strange smell of soiled nappies wafting through the air.  If I had to guess, I’d say that I have been thrown away and discarded like a broken appliance.  My life serves no purpose anymore, and certainly serves no more tea.