“Thank you Carl for nominating me.  I nominate Liz Harlow, Jamie T, and Graham!  Good luck everyone!”

This was my first exposure to the scarab beetle challenge.  Dave promptly plunged a bucket full of clicking, hissing death onto himself, scattering scarab beetles all over himself and his bathroom floor. As I watched the video of ravenous insects burrowing their way into my best friend’s flesh, I couldn’t help but wonder at the futility of it all.  Sure, the challenge was raising awareness for people who have been eaten from the inside out by scarab beetles, and it was raising money for charity, but I wasn’t sure if this was the best way to highlight their plight.

Dave’s agonised panting faded away as the video cut to black.  I clicked on a suggested video which depicted another friend violently maiming themselves for a good cause.  As Gemma’s soft tissues were converted into delicious homes for another family of hungry beetles, I still found the video content shocking, but already the impact had been lessened.  After witnessing another 5 of these videos, I became desensitised to it completely.  People were being eaten alive in front of my glazed eyes, and yet I felt totally numb to their pain.  By the 6th video I wasn’t sure why I was watching these voyeuristic torture films anymore.  YouTube’s suggestions had already taken me far outside of my circle of friends, and I found myself watching unknown randoms performing the challenge.  The videos started to blur into one cacophony of human misery.  I idly clicked the next link and waited for the content to finish buffering.

“Hi, I’m Ramon.  Today I will be doing the scarab challenge on behalf of cancer research!”

Wait, that’s not in the rules.  I thought the point was to raise money and awareness for people injured by scarab beetles.  I was appalled that someone dared to hijack this good cause on behalf of another charity.  I mean, cancer already has a lot of charities devoted to it, but there is not enough done to aid the historians who find themselves the victims of flesh-eating booby traps in dusty Egyptian tombs.  As a beetle burrowed noisily into Ramon’s brain, I clicked the video away out of disgust.  That charlatan wouldn’t be getting any more Internet traffic from me! 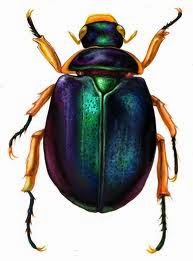 At that point I received an alert to say that I had been tagged in a video online.  I clicked the alert and was greeted by an image of my own sister holding a familiar bucket.

“Not you too…” I muttered out loud.  I pressed play and prayed that it was a joke.

“Hello everyone!  Today I’m doing the scarab beetle challenge on behalf of people with Parkinsons.  I nominate Cheryl, Jimmy, and my brother, Kyle!”

This had to be a joke.

Once the screaming had subsided and the sounds of a paramedic rushing to the scene finished the video, I sat in stunned silence for a few seconds.  I had been nominated.  Everyone in my circle would be expecting a video of me, covered in a man-devouring swarm of insects, to be uploaded within the next 24 hours.

My survival instinct said no, but my overwhelming desire to be accepted by my peers said that I had to do it.  My life wouldn’t be worth living if I didn’t do it.  People would spit on me in the street more so than usual.  I couldn’t have my friends and family believe that I was an uncharitable sort.  The money that it could raise could save someone’s life.  I briefly considered making a video of me just giving some money to charity, be that would be “unsporting” and “not in the spirit”.  I could hear their mockery already, plying on a peer pressure that I hadn’t felt since my friends dared me to piss off of a bridge in primary school.

My fate was already sealed.  I went outside and inflated the paddling pool, then promptly purchased an order of beetles from Amazon on next day delivery.
Posted by Adam Lloyd at Friday, August 29, 2014