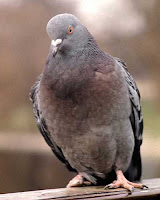 Sup cheeps!?  It’s me, Ollie The Pigeon.  For those who don’t remember me, I urge you to read this, or perhaps you’d like to read my daily life updates here.

Anyway, something really weird happened to me the other day which I wanted to share with you all.  Sure, my daily struggles through the urban jungle might seem a little weird to you humans, but I’m talking about something exceptionally strange.

The morning started off typically enough.  I awoke to find that only three new ticks had taken residence under my wing, then one of my best mates, Barry Fleece was squished to pieces by an oncoming bus.  All in all, it was a great start to the day since we all got a free breakfast from Barry’s entrails.

As lunch time rolled around, I waddled over to my favourite bin to fix myself a snack.  For those who are interested, the best place to eat around my way is definitely the bin opposite Burger King on Victoria Street.  It’s where all the Burger King wrappers get thrown, so quite often there’s some tantalising grilled cheese to be pecked off of a used condom in there.  I’d go as far as to say it’s the greatest place to eat in the entire world, if we’re not including Greggs shops.

Anyway, I was shocked and dismayed to find that my favourite snack outlet had been permanently closed.  There was a huge sign on it with indecipherable hieroglyphs all over it.  I had to go fetch my mate, Dennis Juice (a slug) who can read human scribbles (who, incidentally, is typing this up for me in exchange for some Kit Kat foil).  According to Dennis, the bin had been closed by order of mysterious being or entity known as “The Council”.  I didn’t know who this Council person is, but he’d managed to disrupt one of my main food supplies.  This would not do.  They’d placed a cover over the top which I couldn’t prise off, no matter how hard I made Dennis try.

Luckily I had a backup plan.  I’d simply head over to the churchyard and beg the old people for pieces of stale bread.  Those suckers always give you something if you stand around long enough and show off your gammy foot for sympathy.

So there I was, hamming it up for the old codgers, limping all over the shop and cooing those dulcet tones that melt their hearts, and yet no one would give me anything.  One elderly bloke actually got up and walked off when I came close, taking his cheese and onion pasty with him.  I couldn’t understand.  This had always worked in the past, so why weren’t they parting with their baked goods?

A little while later, I noticed another one of those baffling signs attached to a streetlight nearby.  Dennis told me that the sign said “Please do not feed the pigeons”.  This was another notice from “The Council”.  Who was this Council and why was he pursuing this vendetta against me?  It seemed that everywhere I turn, The Council were coming in and making my life a misery.

Feeling sorry for myself, I decided to go the nearby hangout spot and ask my mates about this Council fella, see if anyone knew anything.  You want to know where pigeons like to hang out?  The ledge above Next is a great spot to relax, shoot the shit with other like-minded individuals, and shit on humans who are particularly ugly.  Anyway, when I got to the ledge, I discovered that someone had put these little spikes all over it.  This had us all confused and we flew around in circles for three hours trying to figure out what the fuck was happening.  We couldn’t land.  It was really scary.  Then someone had the idea to go and land on another building which saved us all from dying of exhaustion.  Honestly, whoever had that brainwave pretty much saved our lives that day.

There was no doubt in my mind that the nefarious Council was behind this heinous act of criminality.  I needed to find out more about this Council creature.  What does it eat?  Does it gain sustenance from my eternal misery?  What kinds of elemental magic is it weak against?  Anything I could find would help me understand what I was up against.  That’s why Dennis and I broke into the local library to access their computer.  We snuck in through an open window and began our search for The Council online.

What we found out shocked us to our core.  I’m not sure how much you humans know, but you all have a local council who are basically your overlords.  They clean away your waste, tarmac your roads, and give you local services.  In return, they ask for total and utter subservience.  You have to hand over “Council Tax” money otherwise they’ll send you to jail.  They also make decisions on your behalf, without consulting you.

Humans, we need to work together to overthrow these Councils and their bullshit.  They are fat cats, growing large and wealthy off of your tax money, and I hate cats!  I knew this cat called Christopher Mange who’d howl all night and was a right bell end.  Do you want to allow this type of behaviour to continue?  Please join my cause.  I’m starting an underground resistance movement which so far consists of me, Dennis the Slug, and Christopher the cat, although we’ll kick him out as soon as he serves his purpose.  Let me know if you’ll help me, then we’ll march on the Council offices and cover their windows in birdshit.  Viva la resistance!

Ollie The Pigeon is a Twitter side project of mine.  If you want to hear his words shortened down to 160 characters, follow him here @Olliethepigeon.  He's quite outspoken and will probably follow you back if you tell him you came from here.
Posted by Adam Lloyd at Monday, December 03, 2012