We at Muppets For Justice may be even more out of date than print media, but today I'd like to talk to you about the US election.  Last Wednesday saw President Barack Obama elected for a second term.  This was good news for people who wanted to keep control over their own wombs and ovaries, and it also resulted in a hysterical meltdown by Donald Trump: 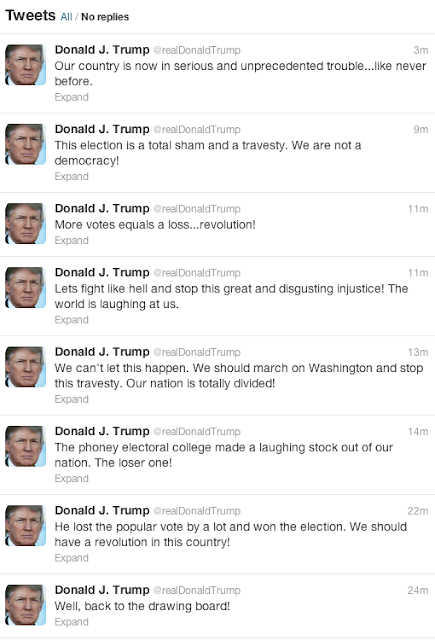 I’m looking forward to the Trump revolution for a number of reasons.  Firstly, I’d like to see a country run by a man who has made a living out of bankrupting himself.  Take THAT national debt!  Secondly, I’d love to see millions of people on protest marches wearing Donald Trump’s signature hair.  When a gust of wind swept over the crowd, it would look like a million blonde ferrets doing a Nazi salute.  Lastly, his name is Trump!  Trump!  As in fart!  Ahahahahaha!

But in all seriousness, a hearty congratulations has to go out to President Obama for winning a second term.  I imagine that he will want to celebrate this historic victory in style.  But what kind of party is suitable for a President?  I doubt he’ll be all that enamoured with a Dinosaur themed party.

I had a nice long think about this and I think I’ve come up with a celebration fit for a President.  I decided to email my idea to the White House and make a suggestion:

I would like to congratulate President Obama on his recent electoral win.  I don't follow politics very much, but I understand that he's become the Alpha Male of America and has won appropriate mating rights?  Well done, sir.

Anyway, I wanted to know what Mr Obama's plans were for celebrating his win.  If he happens to swing by my neck of the woods, I would like to invite him to my mate Steve's stag do (bachelor party).  I understand that the President likes to drink Guinness, and as luck would have it, we're going to the Guinness brewery.  Steve is really excited to see the President and I've kinda already promised him that Mr Obama will attend.  It just sort of slipped out.

If Mr Obama isn't intending to drink very much (he might need to drive us to the wedding the next day), he can always come with us paintballing beforehand.  Make sure he brings a pair of trainers because things can get a bit slippy out there.

Anyway, it's on the 30th so let me know what time he'll be arriving.

I have yet to receive a response, so I am left to assume that everything is fine and the President will arrive as planned.  When I meet him, I'll let you know what he's like and try and persuade him to do a guest Blog next week.  I imagine after a few beers, he'll be totally up for it.
Posted by Adam Lloyd at Friday, November 09, 2012