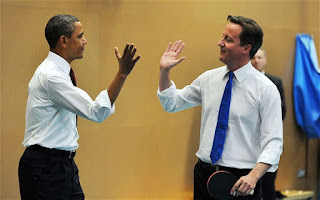 David Cameron:  And so have I.  In fact, me and my good friend Obama-

Obama:  I’m not your friend.

Cameron:  Oh right, still in “war mode” are we?  Hehe.  Well anyway, we had a bit of a friendly paintball skirmish the other day.  GB vs USA.

Obama:  There was nothing friendly about it.  I bought along 5 of my most highly decorated CIA field agents for the task.  We set out to win.

Cameron:  And I bought along 5 of my Bullingdon boys for the ride.  Oxbridge’s finest, no less!  I tell you, there ain’t no posse like a Bullingdon posse!

Obama:  Didn’t one of your guys spend the entire match running around in the open with his mask on upside down?

Cameron:  Who, Boris?  Yes, it was a superb piece of strategy on his part.  He provided a distraction so that we could take the flag.

Obama:  He didn’t even know how to take the safety off.

Cameron:  It was all part of the plan.  He is a master tactician of the highest order.

Obama:  He got disqualified for throwing rocks at people and had to sit on the bench for the rest of the day.

Cameron:  To be fair to him, rocks do look slightly like smoke grenades.

Obama:  Whatever.  I can’t believe you guys made him a Mayor.  Anyway, the result is all that mattered, and I’m pleased to say that-

Cameron:  Wait!  Don’t tell them the result yet!

Obama:  Why, are you ashamed?

Cameron:  No.  You don’t just skip to the end in war stories.  You have to spin a yarn.  You have to tell a tale that will resonate with future generations.  You have to paint a hellscape that will inspire youngsters to work together, thus preventing them from repeating our futile mistakes.

Obama:  How do you intend to do that?

Obama:  That’s definitely one for the anthology.

Cameron:  There’s another 17 verses to go.

Cameron:  Oh alright.  Anyway, the first game went off without a hitch!  Team UK executed a highly competitive strategy that was designed to infiltrate the enemy fortress and take the flag from under the American’s very noses.

Obama:  So why were you scrabbling around in the dirt while we picked you off from a distance?

Cameron:  We were attempting to dig out the foundations, thus collapsing the structure.

Obama:  Might have helped if you could get within 50 yards of our base.

Cameron:  Yes, on reflection the plan could do with a tad more polish.  I’ll get the chaps at the MOD to work on it immediately.

Obama:  You do that.  Anyway, on round 2 the roles were reversed.  We had to assault the base.  Luckily, I had one of our chief intelligence officers map the entire compound so we knew all the tactical choke points and fortified points of entry.

Cameron:  Unfortunately, the weather was against us and it suddenly became very foggy.

Obama:  That’s called a smoke grenade son.  I rolled it right between your legs and peppered your back with paint.

Cameron:  Oh right.  Did you really have to turn it into a hostage situation though?

Obama:  Hey, one of you guys had moved the flag.  You shouldn’t do that you know.

Cameron:  Yes, but did you really have to subject poor George Osbourne to torture?  He’s still on sick leave due to the trauma.

Obama:  Hey, if your guy can't stand a little waterboarding, maybe he shouldn't be in a warzone.

Cameron:  Technically it’s an international incident.  He’s a member of the cabinet for money’s sake!

Obama:  My guys get results.  You’re just bitter because we kicked your asses!

Cameron:  I think you’ll find you kicked our arses.

Cameron:  Where I come from, a fanny is a vagina.

Obama:  Oh, I thought you were listing things you were scared of.  Just like you did when we tortured you.  It’s a bit unhealthy for a grown man to still be scared of losing his mother in a crowded shopping center.

Obama:  Consider it payback.  In fact, speaking of paying back, when are you going to send the money for the meal we had after paintball?  After we’d eaten, you all just smashed the table, mooned at everyone, then ran away and left us to pay the cheque.

Obama:  We want that money.

Cameron:  ...Is now a good time to ask about our Special Relationship?
Posted by Adam Lloyd at Monday, November 19, 2012