S leads me onto a slightly stranger interest of mine; Signal intrusion (which sounds much better than Sausages, which I was going to write about).  Signal intrusion is basically the act of interrupting a broadcast (such as a TV or radio broadcast) and hijacking it with your own content.

Now, when I say this is an interest of mine, I mean that I am fascinated by the concept.  I don’t attempt to jam TV broadcasts in order to influence a political uprising and brainwash people into doing my bidding.  Not yet, anyway.  The equipment is a bit pricey, and I don’t have the time to take control of the Earth right now, what with my cheese collection which is in urgent need of re-categorisation and everything.

Signal intrusion might sound all very Sci Fi, but according to Wikipedia, this is quite easily achieved with the correct equipment, which makes it rather surprising that there are so few examples of it occurring.  Perhaps the fact that it is a highly illegal act in most countries is enough of a deterrent, but that’s never stopped murders in the past.

Anyway, one particular example which caught my attention and has fascinated many others, is the Max Headroom Incident:

This was broadcast twice in the same evening.  The first incident occurred on American station named WGN-TV, but only for a few seconds before the station reacted to the hijack and restored the usual broadcast.  The second incident occurred a few hours later on WTTW, but this time the hijacker managed to run the whole thing.

As you can see from the video, the guy in the Max Headroom mask mentions “nerds” a lot, and also references the Coke advertising slogan “Ride The Wave” while holding up a Pepsi can.  He also makes reference to a “dirty” glove, and says that his brother has the other one.  I’ve no idea what this means.  Then he gets a spanking with a fly swatter before the screen goes blank.

The Max Headroom incident may seem rather immature and uninspired, like a schoolkid in an argument who can’t come up with a rebuttal, so just lets out a massive fart instead and says “that’s what I think of you!”  However, I find the idea that someone can interrupt a broadcast and put out what they want a little unnerving, yet utterly compelling.

In the past, I’ve written short stories about pirate TV or broadcasts which have been designed with malicious intent.  One story (which I never finished) involved a new TV station which appeared unannounced one day on people’s TVs, and broadcast nothing but a pale, eerie face with no sound, 24 hours a day.  People became obsessed with this station, trying to find a reason for its broadcast, picking apart tiny details on screen and finding non-existent secret messages.  Eventually, the general populace decide that it’s a government conspiracy designed to distract them from political inadequacies, and start a full blown revolt, toppling the regime and executing their leaders in the streets.  In the end, it would turn out to be nothing more than a viral advert from a new film.  I really ought to get around to finishing that.

On a slightly different note, another strange broadcast-related occurrence is the existence of numbers stations.  Numbers stations are unacknowledged radio transmissions, which occasionally relay sets of numbers at random across the airwaves.  It is widely believed that these are government sponsored stations which broadcast codes to spies who are working out in the field.  As usual, Wikipedia has more information than I could possibly give.  However, I find it rather interesting and again, unsettling, what with the musical chimes and computer generated voices reading what appear to be strings of nonsense to us, but what might actually be an order to have someone killed.

In other words, unexpected happenings on TV unnerve me somewhat.  I find white noise almost unbearable, and I feel anxious when stations experience technical trouble.  I used to feel freaked out as a kid when those old test cards used to appear on screen.  It was looking at something that isn’t meant to be seen by humans, like peering at Satan’s sphincter.  So, to try and creep you out, please enjoy this rather fetching picture of a test card: 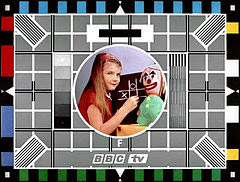